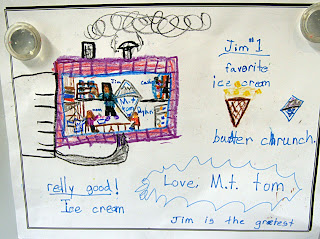 Last week, the drawing above was delivered to me by an articulate young man named Dylan.   He found me in my ice cream den in the back of the shop and proceeded to explain he'd nominated me for a 'Kindness award'.   He told me all about a group he belongs to at Easthampton's Center-Pepin school called the Junior Leadership Club. Their assignment was to find someone they thought was 'kind' and invite them to a little pizza/cake party to be held during the next meeting at their school.   He went on to describe why he thought I was kind - that it was nice I gave away all that ice cream during last October's freak snowstorm, and that I brought enjoyment to Easthampton with my shop.   To say I was caught off guard and humbled by this confident young second-grader would be an understatement.   So when I turned over his drawing to discover on the other side an invitation to their Kindness Party, I knew where I was going to be that following Wednesday afternoon. 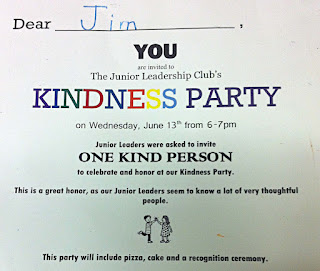 I really had no idea what to expect from a meeting of first and second graders, but I knew I couldn't disappoint my new friend Dylan.   The meeting started with the twenty or so members sitting in a circle on the floor of their cafeteria.   Sitting with them were parents and their nominated invitees.   After a brief overview of the club, Jane Lohmann, organizer/volunteer/parent extraordinaire, explained that the theme of the club this year was 'kindness'.   Throughout the school year, they played games and completed projects that all related to kindness.   This included demonstrating acts of kindness through skits and building a giant bulletin board to display the many acts of kindness they've observed.. 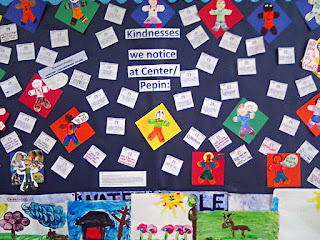 Then it was time for each member of the club to introduce their guest and explain to the group why they thought this person was kind. Dylan repeated the same pitch he gave me in my kitchen the week before, without a hint of shyness.  A future leader I have no doubt.   Others described the kindness of their guests - 'because he's my best friend'. 'Because she's really nice to me.'   'Because he lets me play with his stuffed animals.'

I felt honored to be in the company of such kindness. 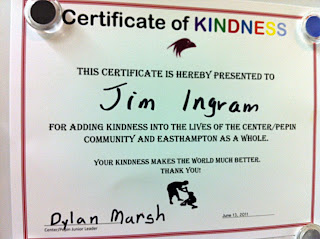 After all the nominees were introduced, we played a game, 'what's your favorite ice cream flavor', (I've played that one once or twice), then ate pizza and cake, kindly donated by Antonio's and Big E's.    It was an hour well spent with the future leaders of our free world. 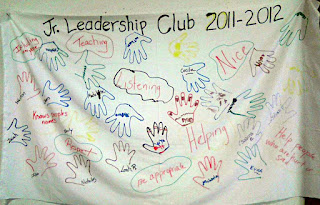 Of course, as I walked back to my shop, I couldn't help but let my mind wander, as it often does, to the depths of my deep thoughts on life and happiness.    Wouldn't it be nice if kindness and sharing and childlike wonder weren't things we so often outgrow?    I thought back to a list on finding our own meaning of life I'd recently surfed into. Who are you?  Why do you matter?  What's your life motto?  What's the key to happiness?

Could it really be that simple?

I thought about the simple criteria a second-grader uses to find kindness in others.   A nice teacher like Ms. MacKensie who listens with genuine empathy.   A friend who shares their stuffed animals.   A buddy who eats lunch with them every day.  A grandmother who reads to them.

Then I started to form a list of my own...   That employee who stays late so I don't always have to.   The friend who spent ten hours building a working volcano with her son for a school project.   The customer who chipped in a handful of change to the kid in front of them who didn't have enough to cover that bag of candy they'd meticulously assembled.   The many volunteers of BearFest 2012 who gave countless hours of time and hard work to make such a fun day happen and continue to happen all summer-long.   That guy Pat we all know who started the Easthampton Good News Page.  The friend who said goodbye to his simple artist life by adopting a young child.  The buddy who's been selflessly taking care of his estranged wife fighting an unwinnable battle with cancer.  Jane, along with partner Megan Harding, who volunteer their time every week to teach a small group of kids the meaning of kindness.

These are the acts that define us.

Maybe it is all about kindness.

I'm reminded of an old video store saying that used to be plastered to the side of those VHS tapes back in the 'old days'.

Well, the 'rewind' part has gone the way of the dodo bird and the video store, but I think the rest is still some sound advice.


Thanks for reading.   And thanks to Dylan for the nod, you are our future and a genuine source of my optimism for it. 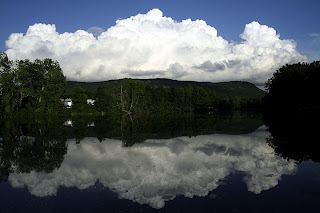 Well, it seems my blog posts are getting further and further apart.   I'm sure I'm not alone in this phenomenon.   Lack of uninterrupted writing time is usually the culprit for me, especially from April through October, but I do still think about blogging often, like the friend I've been meaning to call but for whom I just never seem to make the time.  More recently, though, I've found myself having an existential conversation in my head about blogging in general.   Nine years ago, when my little biz idea I named Mt. Tom's Homemade Ice Cream was hatched, the Ice Cream Diaries was the perfect way to capture and share the excitement of starting a new business.   It began as a hokey little mass email to friends and family.  I think blogs had been invented at that point, but it took a few 'hey, you should make this into a blog' comments for me to finally stick my toe into the blog pool.

The ICD was my own little personal journal, albeit one I left on the bedside table open to the latest scribbled page, for anyone who might click on by.   And like any journal, as I wrote it, I imagined picking it up when I'm relaxing on my retirement wicker rocker and sipping an afternoon aperitif.   Those first years really were an adventure, and although I don't feel like I work any less hard now, I take satisfaction in having successfully parented my baby through its infancy, making adjustments and learning 'the ropes' while it grew to become a healthy toddler that might actually be able to provide me with enough income to live on, and perhaps even buy a house and a new turntable someday. 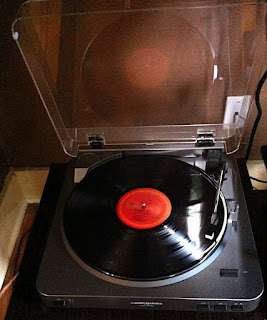 So I suppose part of the writer's block I suffer with this blog is my baby isn't doing the cute little new things it was when everything was new and cute.   Sure, there are plenty of cool and funny moments, and I do still love what I do.  I will concede now, my Dad was right when he told me how much work and time it would require.  Perhaps he even underestimated it a little, a prospect I wouldn't have even considered back at that breakfast table ten years ago when I first pitched him the idea of my ice cream shop to be named later.

Now, my role as Chief Scooping Officer is more about trying to solve the work/life balance problem I have then scheming about new capers for original protagonist Root Beer Rudy and his pals.   No less interesting to me, but likely a bit less exciting to read about.    Which leads me back to the whole idea of blogs.

I believe people do still read blogs, and there are definitely a few I continue to visit on a regular basis.   But I'm guessing cyberspace is a veritable junkyard of abandoned blogs by now, most to be awakened only by a wayward googler looking for how to make a mojito or the best way to clean their cast iron fry pan.  I may be completely off base on this, but they just seem to be so 2010.   So what's next?   Tumblr?   Instagram?  Pinterest?   The return of hand-written notes passed around class?

My in-box is still full of comments to be moderated, but I'm pretty sure links to Russian bride sites and lengthy nonsensical responses in German aren't actually witty points on BearFest 2009 or the Arcadia Winter Solstice bonfire photos I've posted.    Statistics show people do still read my blog, and when I'm not putting pressure on myself to write a post, it's nice to know I have a little creative outlet, parked over at blogger.com, patiently waiting for some food for thought, even if just a morsel.   I'm tempted to blame it all on Facebook, and it's hard to argue the intrusion of that social networking behemoth hasn't changed the way many of us interact on a daily basis, for better or for worse.  Let's face it, it just takes a minute to jot a few lines into the Facebook status box and hit enter.   Link it to your twitter account, and your message gets right into the pocket of hundreds, tens of hundreds, of ice cream loving friends and customers instantaneously.   Done.    Sometimes a picture alone is all you need to make a point. 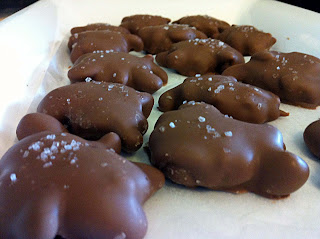 So where am I going with this?   Am I stalling before I announce the closing of the trusty Ice Cream Diaries?

Do I have a point at all?

No, I'm not going to board up the ICD just yet.   I can't say when my next post will be - could be next week or sometime in August.   Perhaps I'll dabble with Tumblr or Pinterest or whatever the current flavor of the month is next week.   Any suggestions?   If I don't respond right away, it's probably because I'm still translating the forty-three other spams your comment is trapped under.

As always, thanks for reading and hope to see you soon.

By the way, this post was originally going to be a plug for my newest little coffee table book, but as is often the case with blog rants, you gotta go where the words take you.   In any event, this just out.  Perhaps a good topic for my next entry.  Look for that next week or sometime in August. 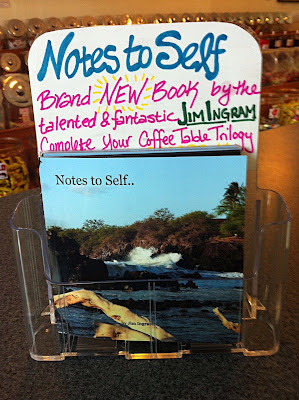 Jim Ingram
After a bunch of years doing the corporate limbo and one failed start-up adventure, I took a two year hiatus from life - traveling, thinking, writing, and charting the new course. That new course is now under sail, in the form of Mt. Tom's Homemade Ice Cream & Candy Store...